“You’re going to Corsica?”  Pascal rolled up his sleeve and showed me the goose bumps on his arm.  “I have always wanted to go there!”  He and his lovely young wife run the epicerie or local grocery store in the village.  “Corse (as it’s called in French) is the most beautiful place in all the world!”  I haven’t seen the whole world but from what I’ve seen so far, I don’t think he’s exaggerating.

We boarded the overnight ferry at Toulon in Provence bound for Bastia on Corsica’s north east coast. The tiny stateroom with three bunks that made the 11 hour trip aboard Corsica-Sardinia Ferries feel like a mini-cruise and the food made BC Ferries seem like a kid’s lemonade stand.  No sign of canned clam chowder or yam fries anywhere.  Fresh homemade pastas, sauces, pizza and salads were prepared individually with care. There was wine and fresh bread, naturally.  Corsica is part of France after all.   So naturally people bring their dogs into the restaurant. 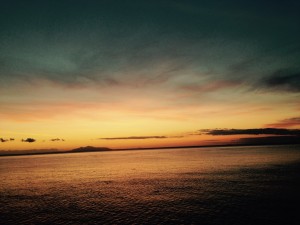 our first mediterranean sunrise.  Probably because it was the first time in over seven months I’d been awake to see it, the sunrise was a novelty again.  When we arrived in port at 8am the water swirling around the massive yellow hull of our ferry was closer to purple than blue.  We gasped and stared at each with that “are you seeing what I’m seeing?” expression. The ocean looked magical without the help of an Instagram filter.

Though it was November and the crowds of tourists were gone, there was still a vibrant feel in the old port city of Bastia.  Locals were buzzing around like busy bees.  The morning sun warmed the stones of the ancient square as we sat in an outdoor cafe watching dry leaves finally surrender and zigzag down to earth from the plane trees above our heads.  I was enjoying my last breakfast of forty-nine.  We talked about how fortunate we were to be there.  We had never even considered going to Corsica until Dominique, our French teacher, suggested it.  I didn’t even even know exactly where it was a month ago.  Then we lucked out again.  An antique street market was being set up right in front of us, in the old plaza facing the sea.  That explains all the activity.  I don’t know why I keep calling things ‘old’.  It’s redundant.  As in, look at that ‘old’ roman bridge, ‘old’ walled city,  ‘old’ castle…duh.

While Cam enjoyed his second espresso, Lyla and I wandered the stalls admiring embossed silver tea sets, jewellery and treasures that sadly wouldn’t fit into our backpacks.  She bargained with her allowance of ten euros for three big rusty old  (see, there I go again) keys to decorate her room at home ‘one day’.  The man said they were from the 17th Century.  They weigh about two pounds.  She was pleased that she’d finally have some decor not from IKEA.  I dickered fairly well on two paintings for the same unbuilt modern house.  One of vibrant flowers in bold thick strokes.  The other, the island I first laid eyes on from our tiny window on the ferry.  One day we will have huge white walls to hang them on.  I love rustic old things surprisingly tucked into modern spaces.  As we walked back to the car with those authentic French paintings tucked under my arm I felt a sense of contentment that a comes from knowing you are in the right place at the right time. Though we had agreed on no birthday gifts (this whole trip is a gift), I had totally scored in the birthday present department.

We crept up and over the winding coast of Cap Corse with a mix of delight and terror.  Steep, extremely narrow, very windy roads with huge plunging drop-offs are not my favourite but they do present the most stunning views.  The coastline is jagged  and spectacular.  Most of the charming hillside villages we passed were folded up for winter but still extremely charming.  Just as our stomachs were rumbling louder than the radio we rounded another corner and saw ‘L’Auberge du Chat Qui Pêche’ a restaurant perched on a steep hillside overlooking the sea.  Funny, it was called The Fishing Cat but two of the biggest sloppy dogs we’d ever seen lounged by the front door.  They looked both ways before they crossed the street to the terrace where we sat overhanging the bluffs.  Fall storm clouds billowed and boiled as we devoured a hearty Corsican young beef stew made from wine, garlic, olives and just a touch of fairy dust. I am a sucker for a slow cooker.

As it was a benchmark birthday celebration and I am a big girl now, we threw the ‘el cheapo’ budget out the window for a few days and booked into a hotel I had read about in Condé Nast Traveller under luxury hotels of Corsica.  U Palazu Serenu is a 17th century palace that has been completely restored and transformed into a modern boutique hotel by acclaimed architect Nathalie Battesti.  There are just six rooms and three suites overlooking the sea at St. Florent and the mountains of North West Corsica.  The perfect balance of ancient and modern.  Did I mention I just love this? Georges the owner welcomed us personally and his lovely staff Eva and Katy settled us into our beautiful room with what appeared to be the biggest bed of any hotel in Europe.  The room was just gorgeous with clean lined modern furnishings, picture windows, fitting art and very high quality linens.  I jumped into that bed and didn’t want to leave.  Next morning we had breakfast

of fresh breads and clementines from the trees on the property out on the terrace overlooking the sea.  The lap pool was too chilly for us but not for our daughter Lyla who took a quick plunge.  It’s hard to keep her out of the water.

We set out on foot to explore Oletta’s steep streets and winding walkways.  We found the one restaurant in town that was open off-season for lunch.  The terrace of ‘A Forge’ was encased in a glass walled shipping container  (modern + ancient again) that did a great job of sheltering us from the howling winds.  Our server told us she was of  Italian decent, as many Corsicans are, and made the pizza herself from scratch.  Okay, then.  Over a nice glass of wine Cam and Lyla began to play all the little videos they had secretly been collecting from family and friends at home.  One after another they sang Happy Birthday and told me how old I am…I laughed, cried a big snotty mess and snorted a few times. So far away, and so close to home at the same time.  It was a party in a big glass box with an awesome view.

U Palazzu Serenu is thoughtfully decorated with clean modern furniture in muted tones that give you a real sense of peace. The art includes many sculptures and the reception desk by local artist Paul de Pignol.  The young chef is just eighteen and already a master of mediterranean cuisine with local flair.  For my super-special birthday dinner he prepared a Corsican menu with a starter of fresh creamy chestnut soup with sizzled local wild mushrooms, a main of wild boar moussaka and dessert of warm chocolate melty lava cake with home made angel hair sugar clouds, raspberry coulis and fresh cream.  We shared a bottle of really delicious local wine and ended the evening over a digestif of Corsican limoncello in the cozy bar.  We toasted our health with newly made friends François and Isabelle who had come from Paris for a long weekend in the country.  Though I was wearing worn out old sandals and the only nice dress in my bag it was accented by the heavy 5 franc silver coin from 1835 on an antique chain that Cam and Lyla had somehow managed to buy at the antique market.  It was the one I had been admiring the day before.  Sneaky little devils.  Five francs for 50 years seems to make sense somehow.  Significant in that we are both really old.

I called this blog “50 Moments” because we are travelling for about 50 weeks and I would turn 50 during that time.  I thought I would write one story per week about what life is like in the middle.  Of a lifespan and of professional transition.  I had no idea or expectation of what turning 50 would be like.  I just knew it would be unique and include amazing food and wine.  Ding, ding, dingity-ding-dong-dang!!  When it was time to blow out the candles it was tough to think of anything else to possibly wish for.  Only my son Holden’s company could have made it better.

Pascal was right, Corsica will give you goosebumps.